Difference between revisions of "AutoHotkey: Launch putty or RDP sessions via a tree-driven selection menu"

The following GUI (autohotkey script) is useful for UNIX admins that need to administer dozens or more UNIX servers. It's probably pretty amateurish but it works for me, if you have useful suggestions contact me: mrbinary but complaints or criticism of my coding end up in /dev/null. 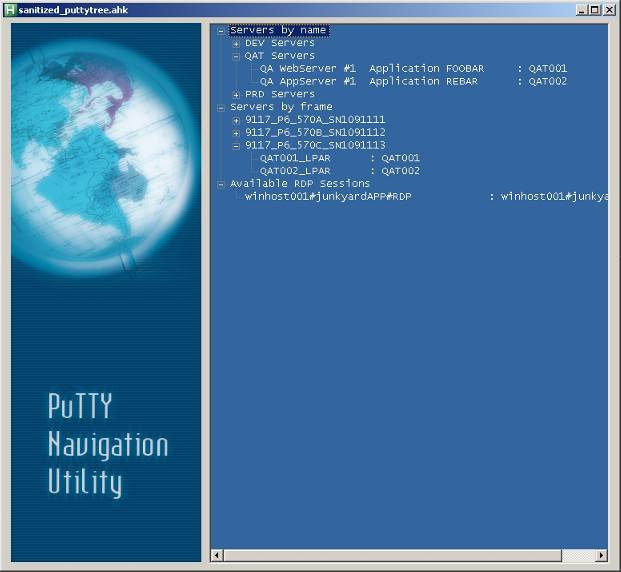 One of our application admins also needs to do RDP (windows remote desktop protocol) sessions to windows servers to administer some stuff, so I extended it to permit him to launch rdp to a specific server. I can't verify that the RDP portion works, because happily I don't need to deal with Windows as a server, I only need to use one as my work-provided desktop. I would imagine it could be used to also launch Windows-based database client software to a specific database or something of that nature.

I had to sanitize hostnames, serial numbers and such from the script, it's possible that I have mangled things a bit in the process. If so, please forgive me for the oversight. I have tested the version reproduced below and it seems to work. Hope somebody finds this script useful, if so, please send me mrbinary an email to let me know that my efforts didn't go to waste! Also, if you want the image that is in the screencap above on the lefthand side of the GUI contact me and I can send it to you.